The Rise and Fall of John and Judith 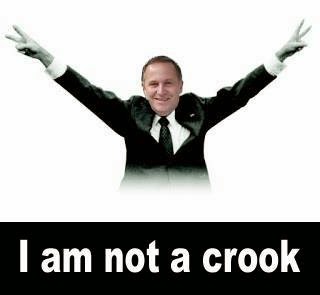 Milk and the PM
The National Party is slowly but surely moving into self-destruct mode and it has been very predictable. The writing has been on the wall, the self-grandiose behaviour, the bullsh*t behaviour and the plain and simple evidence that has been available for the last few years is now obvious to all. While the MSM has attempted to hide the ugly truth the facts have slipped into the public domain. It is a fact that John Key came to power using very underhand methods; he wanted a safe seat in Auckland and particularly in a wealthy part of the city. First off he couldn’t find one, all the seats were already held by National MPs and they were not willing to simply handover their electorate to this upstart who had just arrived back in the country with a bag full of cash. So Key built a small team of yes people, those who would do what they were told without question, they then designed a strategy and implemented it. An old National Party faithful who was lined up to contest the newly formed electorate of Helensville was ruthlessly dumped and replaced by millionaire John Key the money manipulator. This from an earlier blog:

“The TV 3 re-run of John Key [Smirky] telling the PSA conference that there was little chance of asset sales under his watch…yeah right… and that, public servants jobs were secure. He stated clearly in that TV clip “that selling state assets was just plain dumb”.
Of course at that time he was trying to convince everyone that he was Mr. Nice Guy and that he wasn’t the nasty rich back stabber who sunk the blade deep between the shoulders of hard working National MP Brian Neeson so as to get into parliament. Not for him the hard work of rising through the ranks. This from Eugene Bingham: published in the NZ Herald.

How did Smirky get into Parliament?
“Ambition had driven him [Key] to enter politics but having made the decision to leave his corporate career; he faced the grind of earning a seat in Parliament. Key could have pressed for a list spot. But he was shrewder than that. In the 2002 election, the tide was definitely going out on National and there were no guarantees anyone on the list would make it. And, besides, think how it would have looked: a multi-millionaire swoops back into the country from overseas and swans into Parliament. He was smarter than that. He was prepared to fight. And what a fight he had.

The battle to win the National candidacy for the Helensville electorate has gone down as one of the messiest scraps in the party's history. In the process, long-serving MP Brian Neeson was cast aside, loyal party members felt they were ridden over roughshod, and there were accusations of rule-breaking.
What really happened when Key won the West?
By late 2001, Key had made his decision to run for Parliament; it was just a question of how. He was still working at investment bank Merrill Lynch, but had been talking to National officials about wanting to have a serious tilt at entering Parliament in the 2002 elections. Key ruled out taking a list position - a wise decision, given what happened: Allan Peachey and Guy Salmon were among the high-profile list hopefuls who didn't make it in 2002 - and so turned to what seat he might contest. Beverley Revell, a registered nurse who was the deputy regional chair and Neeson's former electorate chairwoman, meet Key. The Helensville electorate had been created through boundary changes to the adjacent Waitakere seat, where Neeson was MP. The new seat was a more blue-ribbon patch. Revell had been Neeson's electorate chairwoman, but the pair had fallen out several months earlier over internal party matters. Revell and Key met at a cafe in an Orakei garden centre.

Revell… thought Key worked in advertising. It wasn't until she said that he worked for Merrill Lynch that her husband told her how much Key was probably worth.
Revell took control of running his campaign, delaying confirmation of his candidacy until the last minute to keep Neeson guessing.  National Party president John Slater invited Key to a traditional New Year's brunch held at his Pauanui holiday home in the first days of 1999. Key arrived with a bottle of Stonyridge Larose. (Recommended price $200)”.
So no hard toil, no fund raising, selling raffle tickets, becoming a chairperson etc…for Smirky he preferred using wriggle methods and stabbing a fellow party member and amble into parliament…once there he only had to knock off Bill English the guy who led the Nats to their worst ever defeat [22% of the vote]. So I can well imagine him playing Judas rather than Jesus in the rock opera Jesus Christ Superstar, Jesus just wasn't that sort of guy...he was the guy that tossed the money lenders out of the temple can you imagine John Key doing that...no he would have invited them to buy the temple!
https://www.blogger.com/blogger.g?blogID=918672081160600879#editor/target=post;postID=7796327349848995432;onPublishedMenu=posts;onClosedMenu=posts;postNum=259;src=postname 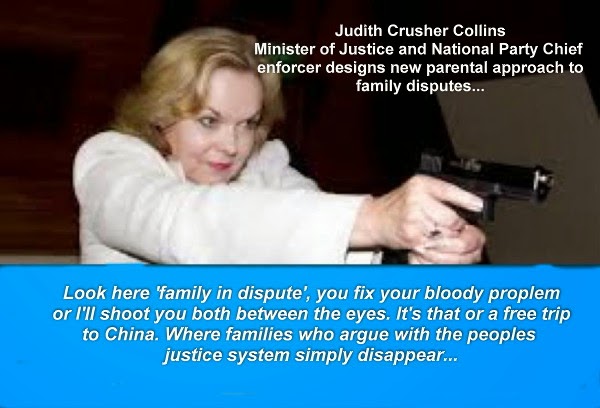 But now Judith Collins ego and mouth and lies have returned to haunt John Key, he knows that he knew about the Collins / Oravida connection, in fact it’s possible that he encouraged it, based on his golf for a 56 thousand dollar donation from Oravida’s boss the chances must be strong that he did know. It’s also possible that Judith Collins because of her very close connections to Cameron Slater [Whale Oil] who is the son of ex Nats President John Slater knows lots about Key’s rapid and unseemly rise up the ranks of the National Party…and as we all know they don’t exactly elect their leaders.
Yet the PM has stated publicly that he chats with Cameron Slater, a very nasty blogger who is being sued for comments on his blog site…here are a few comments from Bomber s Daily Blog site:
“But it surely must be Judith herself who is now in danger of damaging National beyond repair. Why Key is is refusing to move against Collins as her conflict of interest seems to grow by the minute? Finding out that Oravida lobbied National Party Ministers to help with their issues getting milk into the country before Judith then has a dinner with Oravida and a ‘border official‘ is a coincidence beyond possibility.
The problem for Key is that he himself has deep relationships with Oravida. Games of golf, tens of thousands in donations and Oravida using Key in their advertising means any punishment handed out to Collins could impact negatively on Key if Collins decides to reveal how deep Oravida’s influence has within the National Party.
The irony that milk sales to China, which has kept the economy from completely tanking, could end up being the possible ruin of National should be enjoyed by everyone”.
http://thedailyblog.co.nz/2014/04/16/national-drowning-in-an-ocean-of-poisoned-milk/#sthash.O0TcTOLb.dpuf
Posted by Wheeler's Corner NZ at 02:14

Email ThisBlogThis!Share to TwitterShare to FacebookShare to Pinterest
Labels: Collins. Key. Milk and donations to the Nats.