Death by Fire, the untold story

This is election day Saturday the 23rd of September so I can't blog about political matters as such, so I won't.

But I can publish a piece from a guest blogger Karl Pearce. What he says is important in a humanistic and social sense. You may have read about the event or watched it on TV. Public servants are meant to be just that, servants, but are they?

This is a sobering story most suitable for an election day read, because it tells it as it is, no PR bull shit, no excuse and backside covering up. Just a sad but all too frequent story that normally goes under the radar. Here is Karl's blog.


Kia Ora Peter, I hope you are well.
A guest piece for your blog Pete.
nga mihi,
Karl Pearce. 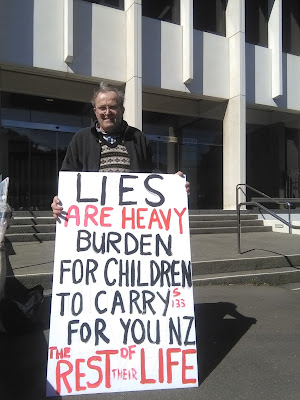 "When I found out what happened to him I wanted to tell his story. Not only because I had met him just the day before. Not only because of the shocking nature of his death, But because we wondered what drove him to such a lengths to set oneself alight on parliament grounds in protest and pure frustration. And that his story is the story of so many others in a broken Family Court System.

Sid, the man who would set himself alight on Parliament front lawns. His Story.


I had been filming at a Anti-Meth rally on Parliament Grounds on Wednesday when I saw this man with a placard standing outside High Court on Molesworth Street. I thought I would go over and see what it was about. The sign he was holding is the first one in the series of photos. I asked him what his sign was about? He told me his story, how he was separated from his wife and teen children, and was going through family court. How he felt frustrated at the system and didn’t feel listened to. He had been lone protesting for several days before I met him and he felt this was the only way he could get heard. I asked to take a photo of him with his sign. He then wanted me to take photos of him with other signs which I did. I shook his hand and told him I wished him the best of luck with his family, then I carried on, to be honest I wondered how I would use those photos.
When I saw the news of the man who set fire to himself, and I saw the sign he had, looking the same, I was surprised and shocked and knew it was the man I met the day before.
I posted the pictures I had taken of the man on my Facebook Page asking If anyone knows him or of him can you please help us to tell his story, and got a massive response as his story resonated among many dealing with loss and family court. There is alot of anger and hurt out there. Several people private messaged me as they only found out where he had gone and what happened after the pictures posted on Facebook, they wanted his story told.

One person who knew of him said, "he was a lovely guy who had his own workshop on Sunset Rd, Rotorua. He packed up his workshop and closed his accounts just over a week ago and wouldn't tell anyone where he was going"
Another who saw him often said, "I never saw him as a man who would ever be pushed so far to reach breaking point, he was not one to be pushed around he fought for what he believed in and its heart breaking to know he died the way he did because that is the only way he thought people would listen."
He is Czech-born mechanic Zdenek (Sid) Hanzlik, confirmed by both ladies who knew him and privately contacted me. He owned F.H. Autoservice Ltd, Sunset Rd, Rotorua which he closed up a little over a week ago and set his affairs and accounts in order. In 2009, His Japanese wife and their two children moved to Japan and left him to sell the business and join them later. Things didn’t go to plan and years later he was in a custody battle over access with his now teenage children, most recently having a S133 report done on him by CYFS, these reports are notorious for its drawn out process.
He was lonely, frustrated at the Family Court System and didn’t feel listened to. Lets not make this about a mum or a dad story, but focus instead on levels accountability, how heresy in family court is an acceptable bar for evidence. You certainly wouldn’t expect it in criminal court. There is a mental health aspect to this story and people will question his stability, and understandably so. By all accounts Sid was a sane, if not stoic individual who deeply suffered loss of contact with his children in a system that would make anybody go mad, and does. When you take away everything from a person they will do one of two things, Kill others or Kill Themselves.


Sid emigrated to Britain in 1987, was a qualified marine engineer and mechanic, and gained New Zealand residency in 1991. He bought the garage in 2000, after having worked there briefly in 1992. He wasnt very well known, but those who did know him respected him and today are in shock. 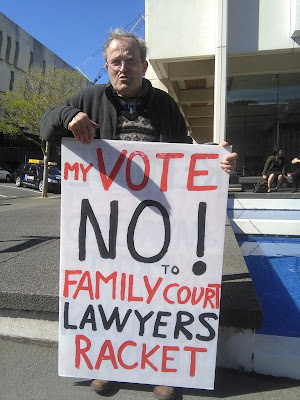 This was sent to me by email:

Peter,
Good idea refraining from the election rat race! We will know soon enough how the cards have fallen.

Amen to your comments in WC in spades. I had a friend living in Palmerston North whose daughter got herself in the family way to some egg. The boy was born and she named him Reon with the father’s surname. All good, my friend and his wife trying to make the best of a bad job welcomed the father into their family. It didn’t last. He was a shiftless neer-do-well who had little concern for the boy or his mother. He moved himself to Wellington. The mother decided it was a step too far and gave up taking the boy to see his father who was neglecting to pay his dues with regard to his son’s welfare and upbringing. This hardened her decision to cut him adrift. In retaliation, he sought an order from the Family Court to have regular access to his son. The Court decreed that the mother should put the boy aged four or five on a bus heading for Wellington to be with his father. You can imagine the consternation that caused his mother. She refused point blank to comply with the order and after time was summonsed to the Court to explain her actions. I was working in Wellington at the time and her father had told her if there was any strife she should contact me. She did and was a broken down mess. The court had made no change to its order and insisted the boy be sent to Wellington by bus at regular intervals. I talked with her and found in the course of a conversation the ‘father’ had reneged on any maintenance payments for his son. I rang DSW and put his weights up. They were happy I had done so and promised action. Her father travelled to Wellington to pick her up and take her home. I found in the course of the conversation she had been subjected to harassment from the father trying to dictate terms. They left and went back home. I rang my friend a week or so later and found all the harassment had suddenly ceased. Obviously, DSW were as good as their word and had implemented their suggested course of action! The girl later married and moved with her family to Australia. Her husband accepted the boy and they all lived together as a normal family. The point of this story supports your contention that the Family Court is devoid of even the most basic humanitarian principles. Who in their right mind would produce an order requiring a young child to be sent the Wellington from Palmerston North in much the same way as a piece of baggage.

I feel particularly sorry for Sid. I judged him on his looks to be a very decent bloke and it is just unimaginable the trauma he suffered by the separation from his family. Of course our Government Agencies will deny any complicity in his death, when they most likely, were the direct cause of him taking his own life.

I would like to hear the father's side of your story, you know, the one you referred to as 'some egg'. While the Family Court and its empowering legislation are appalling, I don't believe any order was made to send a 4yo alone on a bus between centres. Your claim that the father "was neglecting to pay his dues with regard to his son's welfare and upbringing" was contradicted by the fact that he wanted to look after the child regularly. Yet somehow this motivated the mother to "cut him adrift", i.e. deprive the child of a relationship with his father, a serious form of child abuse.

In my experience when separated mothers claim their child's father is 'trying to dictate terms' this usually means the father dared to want something that didn't suit the mother. Similarly, 'harassment' often means the father keeps on daring to express his feelings or preferences or even god forbid, disagrees with her on something.

Interesting though that in your story the mother's biggest gripe was that he wasn't giving her money for her efforts to ruin his relationship with his son. Interesting too that somehow you and she were able to get CYF to heavy the father. CYF have no business dealing with failure to pay so-called 'child support'. A few false allegations usually go a long way when aimed at a father though, I suppose.

Interesting too that the woman was allowed to take the boy out of the country, or perhaps she wasn't but did so anyway. One wonders what filthy lies she has told the boy to explain why he's not seeing his dad.

You didn't mention of course that the father in your story will have to pay the full extortion money sooner or later, plus several times as much again in penalties.

But just to get clear, your position seems to be that a separated father should pay the ex lots of money regardless of whether she's letting him see their child, but on the other hand she shouldn't let him see the child unless he pays. Nice reasoning. That's the kind of gender equality feminists prefer.