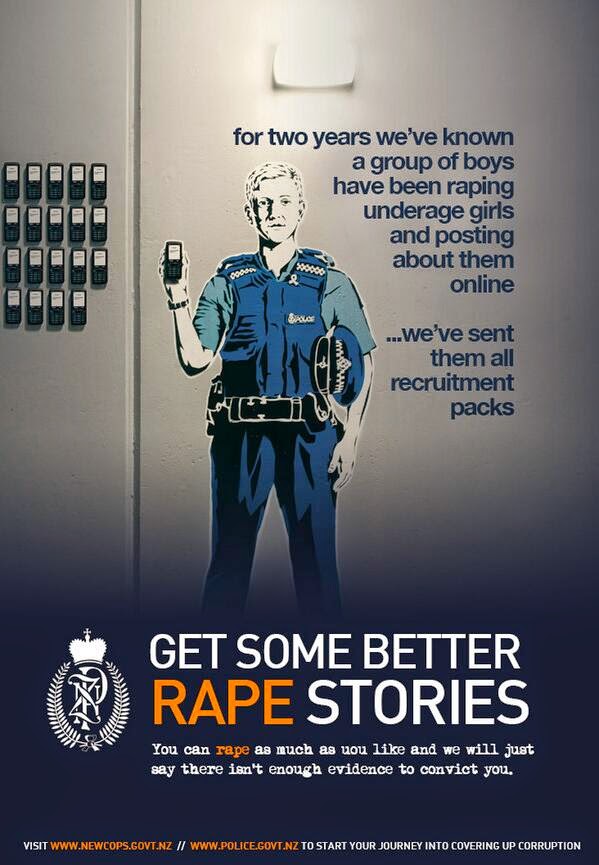 Way back in 2011 a policeman in a fit of anger attacked a person, somebody considered that he committed a crime, [gee what’s new] the police took three and a half years to complete an investigation…three and a half years…[imagine what would happen to you if YOU took three and a half years to answer a question put to you by the police]. The so-called Lawyer who carried out the investigation found the bullying cop guilty and recommended that he be disciplined. But alas a minor player in the police top brass decided otherwise…and don’t be supprised that the guilty offender is about to be or has been promoted. That’s normal police behaviour…think about it…the cop who planted false evidence against Allan Arthur Thomas was later praised during a eulogy…And the top cop was awarded with an honour on Queens Birthday, for what? Anyway I digress… Below are two blogs that tell of the latest police white wash… The first is by NO RIGHT TURN and the second by Tim Selwyn.  You decide if the police are treated like the rest of us when we break the law.

1.
“Back in 2011, a Whakatane police officer attempted to arrest a man who had fled from a traffic stop. When he resisted, he was pepper sprayed and beaten, after which the officer retrieved a taser from his vehicle and tasered him twice while he was lying on the ground.

Today, the Independent Police Conduct Authority released its report into the incident, finding that the police officer used excessive force by beating and tasering the man. Despite this, they recommend that merely that he face disciplinary proceedings. If you or I had done the same, we'd be looking at prosecution and five years’ imprisonment for assault with a weapon.

But what really takes the cake is the police's response to the report: basically a "fuck you". They are "satisfied his actions were not the result of any ill will or malicious intent" and claim that they "initiated remedial action through the employment process some time ago" and as a result they can't do anything more. That’s "remedial action"? ‘Extra taser training’. Break the law, bring the police into disrepute, and they protect you and teach you how to do it better.

Once again, its clear that the police cannot hold their own to account, and that the IPCA won't do it either. Which means that if we want justice and equality under the law, we're left with Graham McCready's solution: private prosecution.

Posted by Idiot/Savant at 6/12/2014 01:35:00 PM
2.
Thursday, June 12, 2014
David Carruthers exonerates NZ Police as he is paid to
NZ Govt appointed 'Independent' Police Conduct Authority chairman, Sir David Carruthers, has been a busy chap.  There are so many malevolent and brutal policemen, to keep slapping on the hand, with a wet travel chit, where does one find the time? The cops have already told him to fuck off even on that - claiming its double-jeopardy to have another bullshit round of internal discipline for the little thug. Why isn't the cop who lost his cool because he had to work a shift on Christmas Day and took it all out on a motorist in his own front yard with every torture device at his disposal... why isn't that thug cop getting charged?  Carruthers said it was unlawful... so prosecute him.  Oh that's right there is no-one to do that except the NZ Police who are also the criminals in these cases.
NZ Herald:  On December 25, 2011 Mr Smillie was signalled by police to pull over as he was travelling along Arawa Rd in Whakatane. Despite the officer activating the patrol car's lights and siren Mr Smillie failed to stop and instead accelerated before turning into his property at high speed.
The officer followed Mr Smillie onto his property and advised him that he was under arrest for failing to stop and that he was required to undertake a breath screening test.
Mr Smillie actively resisted the officer's attempts to subdue him and after being warned that OC (pepper) spray would be used if he kept failing to comply, the officer drew his OC spray and used it against Mr Smillie.
Why was he being pulled over?  There's so much they won't say and why they won't report it.  The judges must have accepted some time ago in a series of steps in logic and tolerance that a constable may stop a motorist without any reason and make them perform things to satisfy them they are not unlawful and therefore may chase people who are not suspicious and arrest people who question their lawful authority.

From what I can work out the motorist/householder was never guilty of anything other than wondering why he was being persecuted.  He remonstrated with the cop and then the cop attacked him.  Now we have the IPCA saying that using chemical spray in people's faces is OK if there is 'resistance'.  They are lowering the threshold each time.  The original justification and only legitimate justification is using it is to prevent immediate harm.  And that immediate harm does not include the usual physical apprehension of an arrest initiated by the police officer themselves, let alone a policeman attacking someone and it is not to induce compliance.  It certainly won't 'calm down' anyone - it is to cause them immediate acute debilitating pain which is the opposite of calming .  Use as a compliance measure is just simply torture.  They are torturing someone until they will do as they are told by the torturer. Carruthers thinks its basically kosher - both chemical weapons and electric shocks (so long as they don't last too long, say 10 secs or more depending).  This is Carruthers' position.  It is untenable for the IPCA chair to try to mitigate human rights abuses as he does. Torture is about 10 years imprisonment isn't it?
NZ Herald:
Despite the use of the spray Mr Smillie failed to calm down and the officer subsequently struck Mr Smillie with a police baton and pushed him against the fence in an effort to apply handcuffs. Following this Mr Smillie fell to the ground.
The officer then retrieved his Taser from his police vehicle and warned Mr Smillie he would be Tasered if he continued to refuse arrest. Taser Cam footage showed that the officer then released the Taser for 13 seconds before attempting to handcuff Mr Smillie. The officer then picked up the Taser and discharged it a second time before handcuffing Mr Smillie and returning to his police car.
"The Authority finds that the deployment of the Taser on two occasions amounted to an excessive use of force and was contrary to the law," Sir David said.
"This was aggravated by the fact that on the first occasion the Taser was used for an extended period of time of 13 seconds.
"The first use of the Taser was not in self-defence, as claimed by the officer and given there were other options open to the officer short of using the Taser, the Authority considers Mr Smillie's arrest could have been effected less forcefully after waiting for the arrival of other police officers."
Following the incident Mr Smillie was charged with assaulting police, possession of an offensive weapon, refusing to accompany and failing to stop. On 19 July 2012, at the Whakatane District Court, police withdrew the charges of assault and possession of an offensive weapon and Mr Smillie pleaded guilty to the charges of refusing to comply and failing to stop.
The other IPCA whitewash exoneration of police brutality is even more extraordinary due the plain ill-will involved.
Long story short: Carruthers says that after you've shot them in the chest through the spine so they are a paraplegic (and they're splayed on the ground swearing mad shit at you as they would) if they don't roll over and do exactly what you say you can then kick them really hard in the face to stun them - that's OK. Shoot them, kick them in the head, and put them in a wheelchair for the rest of their lives and no harm done. It's all legal and cowardly behaviour… revolting stuff.
Posted by Tim Selwyn @ 6:44 pm
Posted by Wheeler's Corner NZ at 18:41 No comments: Links to this post

New Zealand’s dippiest commentator Josie Pagani proves yet again how out of her depth she is: Her swimming ability extents only to a paddling pool rather than an Olympic sized pool.
Her request on Q and A [TV One] that poor old but good looking David Cunliffe should do a deal with master manipulator John Key and cancel the ‘Coat-tailing’ principle before the upcoming election is childlike and simple minded. It’s also idiotic and nutty.
Josie Pagani, a Fox News style self-professed political semi-expert is unaware that John Key and his hit lady Judith Collins just love the ‘Coat-tail rule’ and told the country that even though the public voted by a margin of 78% to 22% to toss out the practice of coat tailing they were going to keep it. By doing that they [Collins and Key] once again gave the country the fingers just as they did with asset sales.
Now I know you might find it hard to believe but Wee Josie was once a Labour Party Candidate for Rangitikei where she was wiped out by none other than Parliaments richest land owner Ian…what’s his name…Mckelvie, who in three years has asked a half dozen patsy questions, and given a few five minute mutterings. No one knew her before the election in two thousand and eleven and to be honest no one knew her after the election. But our balanced and unbiased yeah right… MSM media, like TV One saw her as a pretend ‘Left-wing’ commentator and have groomed her to sit alongside Mathew Hooton that National Party hack used on TV One, Radio NZ’, 9 to noon, as well as the afternoon panel with Jim Mora from 4pm to five.

The real problem is if you ask anyone in the Labour Party who Josie Pagani is, most simply say WHO? She is the unknown Michele Bachmann of the NZ Media one step below Mathew Hooton, David Farrar, and Paul Henry. She is something that no right thinking parent would want her child to aspire to…
Posted by Wheeler's Corner NZ at 14:40 No comments: Links to this post