Our great protectors have done it again...broken the laws that they are meant to enforce. They illegally broke into a persons home, after giving false information to a Judge, and while there went through Nicky Hager's daughters underwear draw in their search for god knows what: It would appear that in the rush to appease the present government and especially the PM the Police will do whatever they are instructed to do without question. For it would seem that the law doesn't apply to them. This is a disgusting state of affairs and means that in real terms we are living in a unoffical dictatorship...if the police bosses simply do whatever the government asks them to do, or act illegally to please a hate blogger like Whale Oil [Cameron Slater] who has a very close relationship and contacts with the PM, as admitted by the PM] asks them to do...what hope is there for freedom...this from Matt Nippert of the NZ Herald.

Matt Nippert: Nicky Hager police raid ruling a win for journalism
5:24 PM Thursday Dec 17, 2015
Nicky Hager surrounded by media at the launch of his book, Dirty Politics in August 2014. above Photo / Mark Mitchell
"Nicky Hager's victory in the High Court today allows the fourth estate - especially its burgeoning offshoots both new and old - to breathe a sigh of relief.
Hager had claimed a police raid on his home last year - as part of an investigation to unmask vigilante hacker Rawshark who was the main source of blogger Cameron Slater's correspondence underpinning Hager's sensational book Dirty Politics - was unlawful.
While declining to make a ruling on whether the police investigation into the hack was deficient and could have been better progressed searching places that weren't Hager's home, Justice Denis Clifford appears to raise his eyebrow at the use of search warrants as fishing expeditions.
"I acknowledge some reasonable belief that they [Police] would discover evidence of the Source's identity. My concern is that reasonable belief, on the material I have been provided with, might better be characterised as hope," he says.
Hager's ultimately successful legal challenge was based on a complaint that police, in going through his daughter's underwear drawer, seizing more than a dozen storage devices, and turning his personal and professional life upside down, had ignored Hager's important legal rights as a journalist to protect his sources.
These rights are important to encourage a check on the powers-that-be, enabling information that some may consider secret or confidential to be aired if publishing or broadcasting is in the public interest.
Having been in contact with Rawshark while working for the Sunday Star-Times, and having reviewed much of the source material Hager used in writing Dirty Politics, I'm satisfied conclusions he reached were both accurate and newsworthy and definitely passed the public interest test.
At the nub of Hager's challenge was how far these rights of journalistic privilege extended. Their applicability to mainstream media sources, like this newspaper, has long been broadly accepted.
Police relations with traditional media, while occasionally frosty (see the recent standoff with MediaWorks over Story's controversial gun-buy) are usually cordial where search warrants are well-signalled and privilege accepted.
In the case of Hager his legal team had claimed - and Justice Clifford accepted - the Police had intentionally overlooked his journalistic credentials in order to get a judge to sign off on the search warrant.
In the warrant he was described as a "political author," and any possibility that he may have privileges to assert - over the identity of Rawshark or any other important stories he was working on - was ignored.
In effect Police had begun from the assumption that because Hager published his articles in book form and not a newspaper, and by himself as an independent and not for a major news organisation, he did not measure up.
The dismissal of this argument, in effect granting new media online and old media in book publishing the same ability as mainstream media organisations to proudly carry the rights and responsibilities that the tag 'journalist'.
Ironically enough, in separate proceedings, the target of Rawshark's hacking - Cameron Slater - is also engaged in arguments also trying to extend journalistic privileges: to bloggers such as himself.
Today's ruling helpfully confirms that, where the public interest test is met, authors - and bloggers - should all be entitled to wear that badge".

You can read and listen to RNZ's report on the subject at:

http://www.radionz.co.nz/national/programmes/checkpoint/audio/201783277/judge-rules-police-raid-illegal,-says-nicky-hager%27s-lawyer
Posted by Wheeler's Corner NZ at 01:29 No comments:

Is this family for real...you decide. 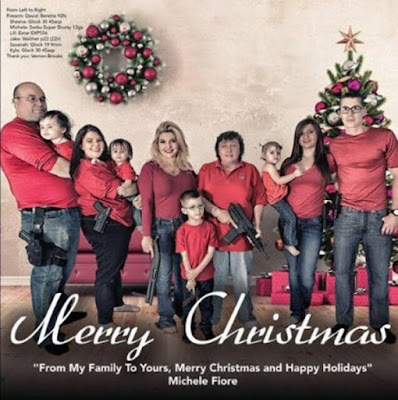 How would you like to get a Christmas card with this picture on it?

This card was sent out by an elected representative Michele Fiore [3rd adult from the left] who represents Nevada State…she is of course a Republican nut case.
Let me introduce you to a typical Republican Party family…a pen picture:
Michele Fiore
American Politician
Michele Fiore is a politician who has been a Republican member of the Nevada Assembly since February 4, 2013. Fiore, who represents Clark County Assembly District 4, is serving her second term.
Born: 1970, Brooklyn, New York City, New York, United States
Party: Republican Party
Residence: Las Vegas, Nevada, United States

This from Stuff:
Are they "just your ordinary American family" She posted her Christmas card to Facebook on Monday (local time) featuring her heavily-armed family smiling for the camera. "It's up to Americans to protect America," the caption read. "We're just your ordinary American family".
The caption was signed "with love and liberty".
Along with the usual Christmas decorations, the card shows seven members of the family holding weapons, including her daughters, Sheena and Savanah, and her mother Lill.

Grandchildren Jake, Jayden, Mara and Morrigan are also pictured. Jake, who Ms Fiore's website says is at least five, is holding a Walther P22.
A detail in the top-left of the card even lists the model of guns, they were:
1. Beretta 92FS,
2. Glock 30 .45ACP,
3. Serbu Super Shorty 12-gauge shotgun;
4. Extar EXP-556; Walther p22;
5. Glock 19 9 millimetre, and
6. Lastly a Glock 30 .45ACP.
Fiore is well-known in the US for her gun advocacy, and her Facebook page is littered with images of her posing with automatic weapons. In 2014 she made headlines for her comments during an armed standoff between a Nevada rancher and US federal agents.
"Don't come here with guns and expect the American people not to fire back," she said at the time.
The post was made only two days before 14 people were killed and 21 injured in a mass shooting in San Bernardino in California.
Fiore also posted a photo of herself holding a gun the day after the shooting.

Seriously folks its no wonder that the US now has a mass killing event every single day of the year...in fact they make ISIS look like angels from heaven...

Listen to Radio NZ Sunday morning programme on what makes a terrorist...it is most enlightening...

Posted by Wheeler's Corner NZ at 17:33 No comments:

When is a bribe not a bribe... 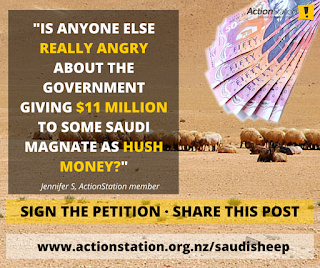 This from No Right Turn:

“Back in May, we learned that Murray McCully had given a Saudi billionaire $6 million plus regulatory concessions in a naked effort to bribe him into removing his objections to a free trade agreement. It was a corrupt deal, an outright bribe, which pissed all over our good reputation as a nation which doesn't do that sort of thing. But rather than cleaning up its act, and forswearing future bribes, the government is planning to give him another $2.5 million:

The government is about to spend more than $2.5 million of taxpayers' money building an abattoir for a disaffected Saudi businessman.
The kit-set abattoir is part of the Government's $12m attempt to appease him.
It has already given the influential businessman, Hamood Al-Ali Al-Khalaf, $4m and has flown 900 pregnant sheep to his farm - nearly all the lambs subsequently died.
Mr Al-Khalaf has opposed New Zealand getting a free trade deal in the region.

And he'll no doubt keep opposing it as long as the government keeps paying him millions of dollars a year not to - because that's the incentive they're setting. But it’s also simply corrupt, and something New Zealand shouldn't be doing. And if Saudi Arabia is so corrupt that a billionaire can dictate their foreign policy and demands baksheesh to do so, they're probably not the sort of country we want a free trade agreement with anyway”. No Right Turn quote ends.

Of course the PM has now taken over responsibility for the Foreign Affairs ministry while McCully is kept away from public view…I’ve no doubt that Key has told his followers in the MSM not to seek any information from McCully…I doubt that Key has the guts or fortitude to allow a by-election in McCully’s electorate of East Coast Bays after the thrashing the Nat's got in the Far North seat once held by that under investigation [for violent family behaviour] Mike Sabin, yet another dumped National party ground-hog ex policeman etc. Its no wonder why the police love Key, he hires all their duds, saves the children of policemen who rape under-aged females, there is nothing like being in with the police...

Our MSM needs to get off its backside and ask some meaningful questions about this massive bribe being given to the bunch of crooks and murderers that run Saudi Arabia, that good friend of the US, and therefor by proxy a friend of ours…this is the crowd that supports IS…the mob we are fighting on instructions from the US. So lets charge those who are bribing the billionaire Saudi front man... lets get some honesty back into politics...and stop gifting tax money to those in no need. Feed the kids before we feed a Saudi so-called business man. We have to start sometime...to stop the corruption to our once proud political system.

Posted by Wheeler's Corner NZ at 20:03 No comments: