Well what do you know…some solid Nat supporters are turning on John Key…A super right-winger like Karl du Fresne has suddenly turned into a scallywag, someone who thinks that Key has become,


“arrogant, smug and even incompetent”. He even suggests that the Nats as a whole have “undergone an integrity bypass”,


God Karl is starting to sound like Cameron Slater in reverse…and I thought they were good friends, well maybe not friends but pals at least…as both are recognised as right-wing bloggers, although it would be true to say that Karl is slightly more intelligent overall than the mad raving nutter that Slater can be and often is.


I know Karl du Fresne is much more of a defunct Act supporter…you know the keep women in their place [the kitchen], love Charter Schools, the market rules, kids don’t need feeding in schools…they need smacking, along with their parents…kind of guy. Charming witty but with an acid laced tongue or maybe I should say pen. He is probably closer to a journalist that Slater claims to be.


But his dislike for Key’s good mate Chris Finlayson the new Minister in charge of the GCSB and the SIS just reeks of disgust,


“Finlayson is reputedly a clever man. And knows it, but clever men have a way of tripping over their own egos’, he wrote.


And he is correct, Finlayson is well known for his sarcastic vocabulary…he like to push the image of being a smart lawyer when in fact he is simply a sarcastic one…and derision is cheap. I’m sure that he is the Prime Ministers chief adviser on acting dumb and stupid while displaying heaps of outright arrogance.


But don’t hold your breath waiting for anyone in Keys government to be apologetic about brain-fades like the one by the arrogant Finlayson had when he said considering a security bill at a select committee was a “Chit-chat”, after all he was just following the PM’s normal behavior. While Finlayson and Key show little or no integrity, the PM leads in regard to integrity or the lack of. Here is what once-a-supporter of Multimillionaire Key Karl du Fresne wrote in his Manawatu Standard column:

“Finally, there’s Key and his relationship with the blogger Cameron Slater, which brings us to the crucial subject of integrity. I now seriously wonder whether the PM has any, given his pathetic dissembling last week over whether he’d been in touch with Slater.


That came on top of his preposterous claim recently that when he spoke to Slater, it easn’t in his capacity as PM. For heaven’s sake give us a break. This is altogether too cute and too cocky…but what is excusable is that he plays us for mugs by bullshitting us”. 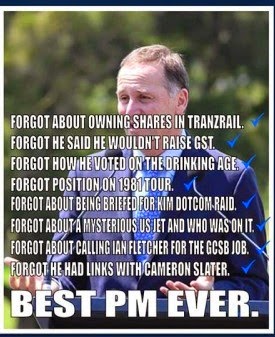 What really worries me about du Fresne is with his newly found admiration for Labour leader Andrew Little whom du Fresne thinks will win the 2017 election…and he may well be right, if Little continues his march to the far right…who knows thousands if not hundreds of thousands may decide to vote Labour as it would seem Karl du Fresne, a child of the ultra- right, has already decided.

So you decide, has Key lost his integrity? Did he have any to begin with or was it all a PR image.

Has the PM and National simply become too arrogant for its own good?

Or is Key simply a Con-man ripping off New Zealanders?   You decide...
Posted by Wheeler's Corner NZ at 02:51 No comments: