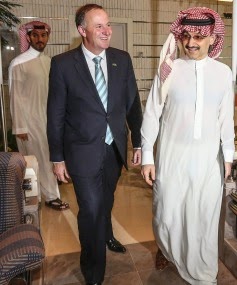 The PM has come under great fire for some of his strange financial deals over the years, we had the South Canterbury episode that cost tax-payers millions and millions, we had the Sky City so-called deal that is costing tens of millions while at the same time introducing hundreds of new pokey machine and increasing the problem gambling woes that abound here in NZ.
Then there was was the 40 million dollar interest free loan to Steven Joyce’s old buddies Media works to pull them out of their financial bog hole. There was Judith Collins private deal with a Chinese milk importing company, the list is endless.

All this while Kiwi kids go hungry and others are forced on to below the poverty line wages and government supports Zero hour contracts for its contracting staff.

Now we have a new and hugely expensive deal between a Saudi Billionaire and John Key as he attempts to buy a so-called free trade agreement. The brilliant Palmerston North based blog ‘No Right Turn’ produced this absolutely stunning and well researched item on the cringing and head bowing efforts by key to spend millions to claim a victory in his latest failure. I don’t think that Key or English ever wanted to reach a surplus…that was always just PR bullshit. This from No Right Turn:
Friday, May 08, 2015
Isn't there a name for this?
The New Zealand government is currently trying to negotiate a "free-trade agreement" (which will as usual be nothing of the sort) with Saudi Arabia and the Gulf Cooperation Council. But there's a problem: banning live sheep exports upset Hamood Al Ali Khalaf, a powerful Saudi businessman. So they gave him $6 million to make his objections go away:
The Government's spent millions of taxpayer dollars kitting out a farm with top-of-the-line New Zealand equipment and hundreds of sheep to "compensate" a Saudi businessman.

ONE News has learned that the Government has spent $6 million air freighting 900 pregnant ewes and farming equipment to Hamood Al Ali Khalaf's farm in Saudi Arabia.

According to Mr Al Ali Khalaf's business partner, Sydney-based George Assaf, everything from the fencing to "the shed and the wool shed and the yards and the drafting machines, the weighing, the scales, you mention it, it's all from New Zealand".

Mr Assaf says the deal was done to "compensate" the pair over a six-year-old ban of live sheep exports in which they say they lost hundreds of millions of dollars.

He says New Zealand was told "unless you fix that part of it, we won't sign" the free trade deal between New Zealand and the Gulf States.

But that snark aside, there's a name for this sort of activity, of paying people so that you get your policy: its called bribery. And if Khalaf was a public official, rather than just a rich prick who had officials in his pocket, it would be a crime.

(No, I don't buy the use of the term "compensation". "Compensation" implies wrongdoing. And we did nothing wrong by banning the trade in misery of live sheep exports. Quite the opposite, in fact. The fact that we're supposedly paying compensation for this simply heaps obscenity on obscenity). Quote ends.

So there you go folks, how low can we go...we condone the Saudi pastime of public beheadings, beatings,support of ISIS, mass Israeli style bombing, etc. etc all in the name of bribery and so-called free trade. The only thing Key trades in is human rights...He is known as the smiling assassin and he sure lives up to that nickname. Oh and he also has a liking for pony tails.