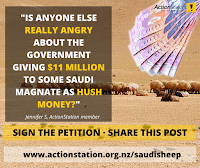 Just as the US was sucked into a criminal void when G.W. Bush flew his friends and financial backers out of the US the week after 9/11 took place, when he knew without doubt that Saudi Arabia was responsible for the attack…this traitorous behaviour has led to various theories about how he got away with it.

Now we in New Zealand haven’t had [thank God] a 9/11 event, but we are in the midst of a eleven or twelve million dollar bribery event involving Saudi Arabia, sheep and a very strange but powerful Saudi so-called business man.

Now I know it’s on a minor scale in comparison, yet the causes are in many respects alike. Bush, we now know, protected those who were financing him and his Father into various oil based projects…
and it would appear that Key and McCully were hoping to protect the possibility of a free trade deal in the Middle East which included Saudi Arabia which was the richest element of that dreamed free trade deal.

The amount and reasons are not all that important, but the behaviour that accompanies each event is. It represents a different attitude by both Bush and Key, one of servitude and sucking up to those with money or power. In the case of New Zealand servitude is the key word. The behaviour of NZ of buying sheep from the very same Saudi business man and then gifting them back to him via a bribe reeks of both stupidity and servitude…no other interpretation is possible by any right thinking individual.

This whole episode clearly indicates just how low and corrupt some of the government’s dealings with outright corrupt countries has reached, and I’m not sure if the apex has yet been reached.

In many respects it is a reflection of money trading behaviour that is now common place amongst the banksters and money traders both of NZ and the world in general.

In the case of Bush he was protecting those who could have been directly responsible for the deaths of over two thousand American citizens and if correct, then that is most certainly treason with a capital T.

Key and McCully’s behaviour may not be treason, but it was certainly stupid and immature. The desire to get a FTA at any cost most certainly lowers the trust and faith others have in regard to the reputation of our nation across the world business scene. But worse still was Key and McCully’s departure from the truth once they were caught out. Parliament became nothing more than a joke as both Key and McCully attempted to talk their way out of their self-made dilemma.

Bush may or may not be guilty of mass murder, but he was guilty of protecting those who financed the 9/11 destruction in New York [15 out of the 18 involved in the attack were Saudi Arabian citizens] and we will have to leave the Americans to clean up their own mess, there is little we can do.

But in the case of our infamous bribery case, we can do something constructive, for example we could request that the Governor General seeks the removal of both Key and McCully for their underhand behaviour in demeaning our national and international reputation of honesty and trustworthiness.

Below is the latest on the GW Bush saga regarding his Saudi Arabian friends who got away with mass murder. 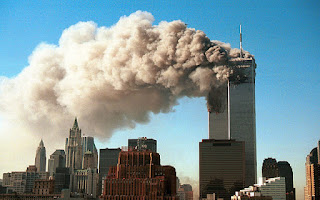 Smoke pours from the twin towers of the World Trade Center after they were hit by two hijacked airliners in a terrorist attack September 11, 2001 Photo: Getty Images

The Obama administration is facing renewed pressure to release a top secret report that allegedly shows that Saudi Arabia directly helped to finance the September 11 attacks.
Rand Paul, the Libertarian Republican senator from Kentucky, is demanding that Mr Obama declassify 28 pages that were redacted from a 2002 US Senate report into the 9/11 attacks.
Mr Paul, who been vocal in attacking the bulk NSA spying programmes revealed by the rogue security contractor Edward Snowden and is running for president in 2016, has now promised to file an amendment to a Senate bill that would call on Mr Obama to declassify the pages. The blacked-out pages, which have taken on an almost mythical quality for 9/11 conspiracy theorists, were classified on the orders of George W. Bush, leading to speculation they confirmed Saudi involvement.

"Nearly every significant element that led to the attacks of Sept. 11 points to Saudi Arabia," he said. "Money is the lifeblood of terrorism. Without money, 9/11 wouldn’t have happened."
Earlier this year, the theory of Saudi involvement was given added impetus by fresh testimony from Zacarias Moussaoui, the so-called "twentieth hijacker" who had taken flying lessons but was arrested weeks before the September 11 attacks – although was later disowned by Osama bin Laden.
In a plea to a New York court released last February, Moussaoui said that senior members of the Saudi royal family were major al-Qaeda donors and were intimately involved with Osama bin Laden's terror network in the 1990s.
He named Prince Turki al-Faisal, then the Saudi intelligence chief; Prince Bandar Bin Sultan, the long-time Saudi ambassador to the United States and Prince al-Waleed bin Talal, a prominent billionaire investor.
Posted by Wheeler's Corner NZ at 21:11

Absolutely great! Certainly your expressed doubts about the official report on 9/11.

I am pleased to see you have adopted my suggestion regarding the GG being forced
to remove Kreyp and McCully. I notice from recent correspondence that Action Station
are looking into running with it, provided they can assemble sufficient signatures.

If you look more closely at official enquiries into various disasters in American history
you will be bound to find strains of Hollywood fantasies running through most of them.
9/11, JFK, Oklahoma Bombing, WACO Siege, to name but a few.

I have looked long and hard at the reports about 9/11 since the day, and have been quite
disturbed at some of the reports. They include the spoken record of the NYFD people on
site that fateful day. I examined the pictures of some of the wreckage and found what I
suspected was neatly gas-cut ends of the steel columns which were bundled up and
shipped overseas, seemingly without any of the in-depth examination the Americans are
famous for.

The other thing was the manner in which the towers came down. If you can recall the
video it showed a row of white puffs of smoke just below the collapse. That to me looked
suspiciously like a controlled demolition. It is carried out by explosive charges, either
embedded in the concrete or a sheet explosive attached on the outside. The lot is hooked
up to electric detonators fired sequentially to cut the support of the columns. It takes a
mammoth amount of work to prepare for the demolition. It does tie in with the reports of
fleets of trucks being present at the towers after dark.

What was never satisfactorily explained in my view was the way WTC Building 4 fell
down of its own accord within its own footprint. The Americans have had long experience
with controlled demolitions and have honed their abilities to a very fine degree.

I saw a demonstration some years back at Linton military camp where sheet explosive
was wrapped around a series of fence posts detonated and the posts were cut off where
the explosion ended not very cleanly and more of a splintery mess, but cut all the same!

I don’t know what steel cut in that fashion looks like. Was it the same steel which
appeared to have been gas cut!

Conspiracy theory or not the official enquiry left more questions un-answered than it
answered.