Why did the Mayor hide from the youth of our city. Wheelers Corner 13 16th March 2019 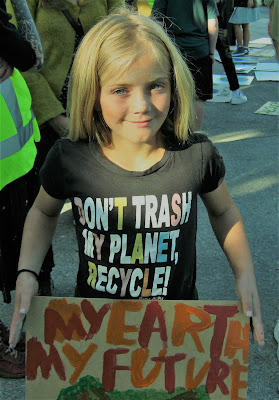 Why did the Palmerston North Mayor hide from the protest outside of Council...and why did he tell councillors that he was 'Out of Town' when in fact he was in the council chamber while the protest was taking place...

Many of the youth protesting outside were protesting about adult hypocrisy and inaction. Was this yet again another example? you decide.

And if the mayor was out of town or tucked up in the council chamber one way or the other some one is telling fibs...

and it is and was obvious to me that it was not the youth of Palmerston North who were fibbing.

The question remains: Where was the Mayor? Was the Mayor scared of accepting a three hundred plus petition from the Youth assembled outside.

We all know as the science has proven, that greed and the absolute obvious selfish desires of the wealthy corporates and individuals have been the major drivers of continued lack of commitment to changing our climate damaging behaviour.

And in my view the biggest negative factor is GREED. Was the very same Mayor who donated $401 thousand dollars to Toyota. And spent thousands protecting a bunch of arms dealers selling the most polluting weapons to each other.

Is the Mayor just another part of the Adult uncontrolled damaging behaviour that is polluting the world in which we live, the one that the youth of the world is asking, no begging, no demanding that we clean up. 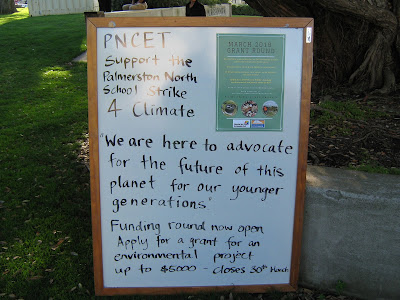 I feel really sorry for the dumb-Dumbo's who are running our world these days, they simply seem to lack the intellectual wit or skill to grasp the obvious fact that they are beyond hope...

Like the bulk of the youth who attended and took part in the march around the Square, [Twice I might add, I managed once] but more shocking than my lack of fitness...was the Mayoral lack of courage in fronting up to the future leaders of our communities. These youngsters showed clearly a way forward for our teachers and Principals who spoke out against the brave and honourable behaviour of three or four hundred youth of our region. 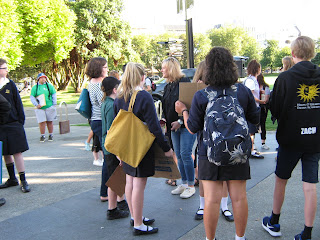 I felt really, really, proud to be a part of a very real and proactive movement by some youth in our city.
It has been suggested by some that the youth of today should forgive the older generation because they "new not what they did! that sounds like a very biblical excuse so that my generation can sleep tight at night.

That is just garbage and tripe, they new exactly what they were doing...Human beings have always been their own worst enemies.

I mean we have killed, murdered, slaughtered millions and millions of people since the First World War [remember the war to end all wars, yeah right] and we are still doing it...it is unfair to humanity to call Donald Trump and his elk and fellow dictators humans...but it would seem we have to, or otherwise they may bump us off...Well our youth are telling us enough is enough and they are correct, lets stop being untruthful and tell the truth we are in an era of self made extinction and we honestly need a REAL rebellion...

and the youth might just be giving us the answer to at least start, the healing and correction processes we actually need. No demand... 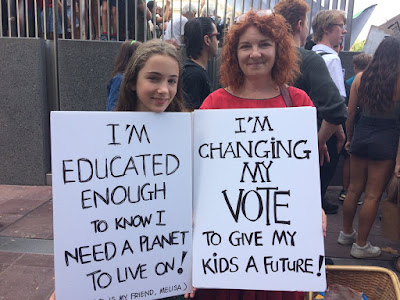 Will there be anyone left to vote for...will Toyota and Trump prevail and rest of us be cast into hell? That my friends is the question the youth are asking of us...and it would seem our mayors and others refuse to answer...Join next months week of action: 15th to the 19th of April 2019. Go to Extinction Rebellion Manawatu on face book and join the planners of various events. 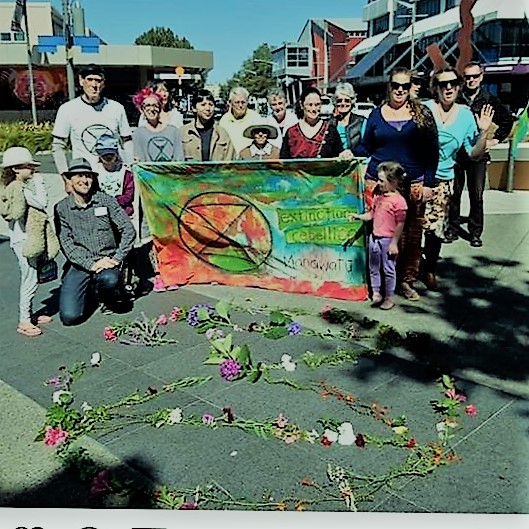 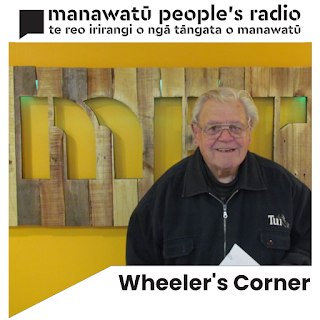 Email ThisBlogThis!Share to TwitterShare to FacebookShare to Pinterest
Labels: Was the Mayor hiding? Youth March for climate

SS4CC seems to have had a good response among the young. It's the greatest shame the deniers will not be able to see the messages being plainly displayed.

As I said earlier most of the adult population remains completely in the dark as to how they can ameliorate the effects of Climate change.

On Sept.24 2018 there were10,000 Electric vehicles. Total vehicle registrations equalled, 3,858,000. I have reason to believe there are in excess of 4,000,000 vehicles on our roads now. Exemplified by the increasing congestion on roads that remain much the same as they were a century or more ago. It's true there have been recent upgrades of highways which, in mind of the Kapiti expressway, have revealed serious failures in their seals. Other motorways have similar shortcomings as well. When you consider that in 1933 there were A little more than 3000 vehicles in the country you begin to see the extent of the problem! How many trucks are there cluttering the roads and motorways often running parallel to the Main Trunk Rail lines where our electrified Main Trunk locomotives remain seriously under utilised? It illustrates the failures by successive Government to recognise the coming onset of Climate Change, mucn less than doing anything to avert it.

LIP SERVICE only, seems to be the order of the day!

It looks as is the murderous efforts rightwing killers in Christchurch, will put the schools strike for the climate on the back foot and yet again the crazy nut cases of the ault right will in the words of Donald Trump have some ggod guys, prove that not all right wingers are nut cases...lets hope that the police do a better than usual job of catching the killers.