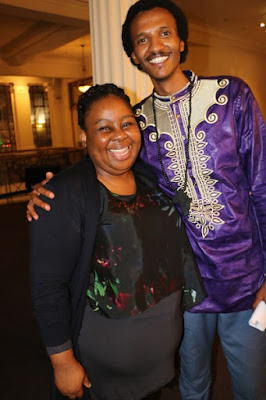 I wonder if Hobson's Pledge will speak out about this latest episode of Racism in Action? This report from Radio NZ says it all...

We here in NZ pride ourselves in regard to racial harmony, but should we? For it seems very much as if we have a deep seated cover-up attitude to the subject, the very mention of 'positive' discrimination seems to sent a shiver down the spine. Why is this? and what can we do to change the inbuilt bigoted blight that represents our some times shocking behaviour.

Using a real case report from the wonderful Radio NZ team relating to the shocking behaviour that was used in the case of Vuyiswa Tulelo the South African High Commissioner to New Zealand treatment really is a wake up call for all of us as we ponder the 'One Law for all' pushed by Right-wing nut cases here in NZ. The following is from Radio NZ:

"A self-described “black woman” and mother of two started popping into a Wellington Countdown supermarket earlier this year and soon noticed she was being followed.
Each time, a security guard would track her as she did her shopping.
“Every day he follows me! Every day without fail. What would be the reason for that?” asks Vuyiswa Tulelo, who arrived in New Zealand from South Africa in February.
Is it a sign that New Zealand is “racist as f**k”, as movie director Taika Waititi said last month?
Because Ms Tulelo, as well as being a supermarket addict, is her Excellency the South African High Commissioner to New Zealand, and she thinks Waititi has a point.

“To security I am every other black woman. He sees a black woman. What does he think? He thinks there is going to be theft!”
Ms Tulelo’s blunt appraisal of how she has been treated are not exactly diplomatic.
“This is a real life experience that I am sharing, my experience in the three months that I have been in New Zealand.”

Countdown managers have since spoken to the guard and, when RNZ approached the company, it apologised to Ms Tulelo and offered to meet with her. However she’s not the only African community leader to experience what they call ‘racial profiling’ in this country. And they say it goes deeper than the odd security guard.

“I know what it’s like to be followed in shops. It happens. I regularly get pulled over by the police. Their excuse is that it’s just a random check,” says Guled Mire.
Guled Mire is an activist and community leader. He was six when he arrived in New Zealand in the 1990s with his mother, a solo-parent who fled the strife of Somalia’s civil war with her nine children.
“My mother is a strong black Muslim woman.”
But Hamilton was not a ‘safe’ place to grow up. Guled remembers being chased by skinheads, being shouted at to “Go home!”

He was actively discouraged from higher education at high school and dropped out aged 16. But he persevered, excelled at university, and is now a policy advisor in the public sector.
He’s MC at several events celebrating Africa Day in Wellington when I meet with him, and he says the racial profiling extends even to the police force.

For these community leaders the problem stems from a stubborn strain of racism in this country, something Labour's Mt Roskill MP Michael Wood says is all too real.
“You only have to look at our arrest rates, rates of conviction and the differentials of people with different coloured skin. We can’t accept that. Any racism in New Zealand is not good enough.”

Tulelo says there is “absolutely” racial profiling by the New Zealand police.
“It is how we are socialised. It is because we are not having those [hard] conversations to say what is it that gives a police or law enforcement officer the thinking that a person with darker skin shade is therefore a problem?”

“The issue that we should talk about is; ‘What does a ‘shop lifter’ look like? If we don’t have those conversations, then we don’t change those narratives.”
Police behaviour is meant to be changing. In 2015 Police Commissioner Mike Bush admitted to “unconscious bias” in the force and promised training for all officers. 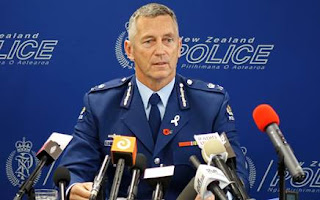 Then in 2016 Guled and other young leaders formed the African Youth Forum and their research led to a report highlighting issues around police encounters with African youth.
But Guled is not happy about the progress since 2016. “We’ve had a little bit of willingness to engage with us from police at a very high level but behind that there is still an unwillingness to engage with marginalised, disenfranchised youth.”

Assistant Police Commissioner Wally Hamaha disagrees.
“A lot of the complaints that were being made at the time, who felt that they were being targeted because of their race, the colour of their skin. We’ve done some significant work over the years in training our staff to be more culturally aware.”
“The organisation is not institutionally racist. It falls back on people who have their own views of the world. Whether they bring that bias into the organisation that’s not the overall view of the organisation.”
Guled doesn’t buy the theory about individual bias. Guled Mire discusses racism at the Social Change Collective event in Wellington. Photo: RNZ Lynda Chanwai-Earle
“For me I believe there are many good cops out there. The cops say it’s the rotten apple theory, but for me it’s a ‘rotten barrel theory’. You have a rotten barrel which is the institution, you put the fresh apples in there which is the good cops, and of course they’ll go rotten, eventually. It’s a culture.”
Dr Camille Nakhid, Associate Professor of the School of Social Sciences at Auckland University of Technology led the research team behind the 2016 report and says the police have done little since except “save face”. She shared her concerns with Mike Bush in April, who replied saying police had stepped up their engagement with African, Maori and Pacific people.

Rather than reassure her, his comments raised red flags. She fears what the police say is greater engagement amounts to “over-policing”, where communities appear more prominently in crime statistics because they are policed more heavily. Guled is continuing to talk to individual officers and welcomes Wood’s words, but says they’ll be holding the government accountable for making real change in combating institutionalised racism. “Actions speak louder than words.” 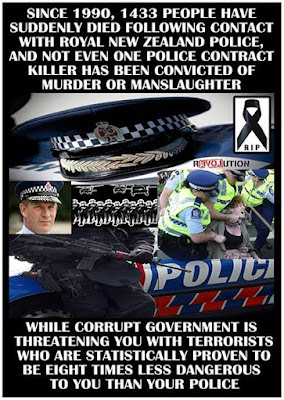 I agree implicitly with the findings in your latest post.

This seems to be not the only example where our police are found to be
completely out of order. I am referring to the universal Police 'sport'
of pursuing Hoons on the roads. Which most times result in the deaths of
said Hoons and too often their hapless passengers.

I was particularly perturbed about the report of the pursuit a couple of
days ago at Longburn in which a 15 year old and a twelve year old girl,
both died. Another girl in the back seat received serious injuries. What
would have been the outcome had they been left to their own devices
minus the excitement of the Police chase? How many speedsters do we meet
in our every day driving experiences, who are guilty of obvious breaches
and yet live to tell the tale?

Could the same have been said of the 15 year old, had his incursions
been ignored and he had been allowed to proceed without incident? All
cars display rego numbers, how difficult can it be to record the number
and follow up on the misdemeanours the following day?

A similar situation prevailed on the motorway out of Wellington. A group
of kids in a car who had been flouting the rules, boozing, and then
driving at speed out of Wellington, attracted the attention of a Highway
Patrol who immediately added some excitement to the situation with
lights flashing and no doubt siren blaring. Of course the kids in the
car, would have known they were in the wrong and instead of stopping and
facing the music, mistakenly decided to out run their pursuer. The car
eventually ran off the road killing a young passenger in the back of the
car. Given the time of the incident, well after midnight, what sort of
danger would a speeding car present to other road users? On a motorway
where all cars are travelling in the same direction?

At any normal protest action on the streets the roads are lined with
wall to wall rozzers, picking on mostly youngsters exercising their
rights to peaceful protest. How can it be that in the situations I have
described, there is a sudden shortage of rozzers who could be gainfully
used setting up road blocks or laying road spikes?

It seems to me the problem lies with Hoons both in uniform and the
offenders without, using the roads for their own excitement. Police
chases present real danger to other road users, power poles and roadside
trees, life and limb, with very few observable benefits.