Can we trust the Police?


What has happened to our police force?
Why is it becoming so political both in nature and in its operation?
The past couple of weeks has without doubt strengthened the believe that their orders come from the political elite rather than from a true sense of justice and belief in the justice system. In fact it certainly appears that their operational aspects are definitely defined by their political masters. 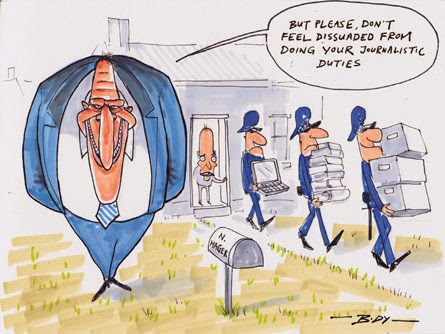 As the Herald cartoon points out the raid on Nicky Hager’s home in Wellington while he was away in Auckland simply enforces the ever growing perception of police incompetence and even worse, bias in how they apply the laws of the land.

One of Wheeler’s Corner readers emailed me asking this question:

"How can there be any confidence or trust in the Crown prosecutors - and the NZ Police - when they conspire to defeat the course of justice as they do?  The 'Roastbusters' rape gang is still at large without a single prosecution after eight months.  Mr Sentry Taitoko died in a South Auckland police cell on 23 February and six months later no autopsy report, no nothing - killed without consequence. No-one at the top speaks out or does anything.  A suspected killing has taken place in a police station and it is being covered up by the suspected killers - the police staff - and nothing happens, as if it didn't happen at all, as if it couldn't happen.  The NZ Police are getting away - most likely quite literally - with murder.
I could not answer his question...maybe you can?

Just the other day No Right Turn published this very powerfully honest appraisal of police behaviour:

More rotten police
There's an Independent Police Conduct Authority report out today about a case in Timaru, and its deeply disturbing. Police went to a house in Timaru in response to a report of domestic violence. Despite being told to leave, they entered the house, but did not find anyone in danger. They then invaded the privacy of people in the bathroom, and when they were told to leave again, tasered and pepper sprayed one of them. They then charged him with assault and perjured themselves in court in an attempt to gain a conviction, with the full knowledge of prosecutors and their superior officers. The prosecution was unsuccessful, and the judge was very clear that the police had exceeded their lawful authority.

The IPCA hides all this behind the anodyne headline of "Timaru officers failed to follow good policing practice during potential domestic incident". I'd call it something different: trespass, assault with a weapon, aggravated burglary, perjury, and attempting to pervert the course of justice.

There are apparently employment and criminal investigations underway into the staff involved, but we know how that will turn out: the police will whitewash the whole thing (as they've already done once already), everyone will keep their jobs, and nothing will be done. And that's simply not good enough. There should be no place in our police force for officers who disregard the law and abuse their powers to assault people. And there should definitely be no place for officers who lie under oath on the witness stand. Those officers, and the officers who enabled and conspired with them, need to be treated like the uniformed criminals they are and prosecuted to the full extent of the law.
Posted by Idiot/Savant at 10/09/2014 12:59:00 PM

Radio NZ gave some coverage to this startling information, TV One and three completely ignored the item. But this item proves the real damage that is being done to what is left of the police’s reputation as a fair and just part of our justice system…seriously folks this has taken the police since 2011 to finally accept responsibility for the absolutely obviously fact that the law was broken, ignored and even manipulated through the use of lies by police staff to attempt to convict an innocent person simply to back up a bunch of totally unprofessional so-called policemen.

In fact Assistant Police Commissioner Allan Boreham, spend his entire time on National Radio trying to convince the public that the policemen involved had more rights than the innocent person [s] they persecuted, pepper sprayed and tasered…in fact they were so thick that they never realized that the taser camera proved them to be liars.
Can you imagine what would happen to a member of the public who decided to hold back information from the police for three plus years…The APC attempted to say that the Police law breakers could not be touched because they have employment rights…that is crap of the highest order. The police involved broke the law for Gods sake...not once, but three or four times...and their bosses supported their behaviour.

But the police can move quickly when they want to, or when their masters issue instructions. Nicky Hager’s home was raided just one month after National Party Blogger Cameron Slater laid a complaint about his computer being hacked. They ignored a complaint from the Greens, from the Labour party about the behavior of the PM’s ‘Black  Op’s agent Jason Ede and Simon Lusk plus Cameron Slater and Mathew Hooton and the PM’s dear, dear, dear friend National Party pollster and employee David Farrar.

TheDailyblog published the following: Which without doubt could indicate that it’s who you are that counts with the police these days…

Cameron Slater makes a complaint to the NZ Police that his emails were hacked and stolen on August 28th. By October 2nd, the NZ Police had 5 Officers search Nicky Hager’s house for 10 hours. That’s 36 days.
That’s unbelievable isn’t it?
Put aside the fact the Greens made a complaint on the 14th August and Labour made a complaint on the 1st September.
Put aside the fact that the issues the Greens and Labour are complaining about are serious abuses of power. Those  allegations concern Undermining of the Serious Fraud Office, Undermining of the Financial Markets Authority, Undermining of the head of the SFO, Intimidation of witnesses, including Mr Gapes, Use of personal information regarding Simon Pleasants to incite threats, In respect of the Minister, the corrupt use of personal information regarding Simon Pleasants to obtain an advantage (section 105A of the Crimes Act), Use of that information (section 105B of the Crimes Act), Accessing the Labour Party computer system in breach of section 249 and 252 of the Crimes Act, The use of dynamic (ie changing) email and computer addresses to avoid detection and the handing over of SIS info to Cameron Slater that went well outside the normal protocols for such information.
Put aside the indifference police treated the theft of Matthew Blomfield who had his emails stolen and handed to Whaleoil – warning, this link will make you ill.
- See more at: http://thedailyblog.co.nz/2014/10/10/comparing-don-brash-to-cameron-slater/#sthash.JFNj2iO4.dpuf
Posted by Wheeler's Corner NZ at 02:58